What the Dead Say: A memoir of life after death

Before I could stop myself I said, “Ha! Paranormal circus for you, huh?” to the owner, as she was checking my daughter out.

“No one has said anything about the guy in the back?  He doesn’t bug you?”

I’d flustered her. My daughter who is 25, looked down at me (she’s tall) and said,

“Do you see someone around her?”

We’re at the eyelash extension salon. A dead man in the back room sends me a flurry of messages. Pictures on the screen of my mind, and me, eyes wide open, talking to the owner, a girl called Tif, who sports the longest lashes of them all, as sleek and full as a mobster’s moustache.

The man isn’t really there, of course. He was once, this was his house, stood on its end like a saltine box and sloppily added to over the years. The building the salon occupies looks like a giant toddler plopped down custard-colored, featureless Legos every which way adjacent to its tall, yellow rectangle. And how do I know he’s here, talking to me, and still dead? I mean for sure? Of course, I don’t.

I can see exactly who he was in life. Tall, hunched over in a green flannel shirt a farmer might wear, black-stubbled chin, the bloodshot eyes of a drunkard. They don’t often show themselves to me, usually send pictures or feelings. But this guy wants out.

He hates being here. Women, all day, every day. His Momma, a small woman, all bone and angle, partial to large sweaters that flap, pilly and pulled over her craven chest. Not a spare-the-rod type, not a soft-tongued T.V. mom, makeup in place just so—not anything but herself, always, irritable and sometimes grudgingly kind, an extra Little Debbie in his lunch bag, the kind he likes. He shows me the kitchen where they live in this very house, it’s early early early and he’s late late late and the bus is coming but his Mom remembers to drop the cake into the bag and only punches his upper arm a little, fondly, as he runs past her to the door.

That was what the woman gave him, at last, at best. At worst? Well, then. You can guess what she did to him at her worst. I didn’t get details of that, only a vision of a little boy, eyes dark in the night, wet with tears and lacquered over with disbelief.

He sent another scene, same kitchen. His Momma slowly stirring honey into a cup of dark tea. A little boy in the doorway. Afraid to approach. Which Momma would he get? “Ice cream Momma” is what he called her in his head when she’d grin, softly call him, “hey baby” and fold her in her arms. Sweet. Or Ice Momma? When she’d freeze him in her lizard eyes. Click click click went those eyes. Threat. NOT. Threat. NOT. Like a stoplight in a deserted crossroads. If he got stuck between the clicks, well. Ice cream Momma could turn.

I’d tried to explain what that was like to my daughter when she got older. What it meant to see someone hovering over a shoulder of a living person. Never when she was a kid. Most kids can’t handle it. My daughter has the same thing I have. When she was three, she held diatribes and discourses with the dead. I used to watch her. Then she’d tell me about places she couldn’t possibly have been. But my daughter doesn’t believe she has the spark to do it and so, she doesn’t.

I’d told my daughter that people show up over the left or right shoulder as parents or ancestors. If they are on the same level, so to speak, horizontal from the shoulder, as if they’re standing right beside their still-living loved one, they’re cousins, friends or siblings. And if you’re unlucky enough to have a child die before you, they come in at the hip: “Come in,” meaning start sending those freeze frame impressions from that level of the person they’ve left behind. I very rarely see them how they would physically look in life. Sometimes they just draw my eyes to the right section of the person’s body and send me a word. And then I say that word so the person they’re trying to contact and I can work together to see if we can figure out who they are. Who is coming “through” often sends flashes of pictures—flowers, a roller skate, once, an iguana.

“No one around her,” I said, although there was, a school friend, a male, died young. He was trying to come through and I shut it down. I was already regretting my outburst. It’s rude to spring the paranormal (hate that word) on people when they aren’t prepared. The reason I hate the word, “paranormal” is because it means outside the ordinary and guess what? This shit happens to me on the regular. You’d think you’d like it and then you’d be wrong.

The woman, Tif, eyes wide, turned to Sage as she handed her back her Wells Fargo credit card,

“What is she talking about?”

I felt the thread of hostility in that “she” and in the fact that she didn’t ask me directly. She already thought I was insane.

“Oh nothing,” I said, but my daughter overrode me with a smile.

“She feels things about places and sees people who have passed,” she told Tif.

“Don’t worry about it. I just figured you would have felt something,” I apologized with my eyes. “In the back room?”

“No. Nothing,” she said flatly and then attempted a thin smile. I was a potential customer, after all. They were after me to Botox between my brows. Every time I picked Sage up, Tif or the other girl, Jewel, a short Mexican woman with long acrylic nails painted acid yellow, would wheedle,

“Miss Patty you need to come see the doc. You’ll love the Botox!”

Tif was still staring with a smile on her lips only.

“C’mon Mom what do you feel?” my daughter began, but I grabbed her upper arm in her metallic bronze parka and pulled her toward the front door.

“Let’s just get out of here, okay?” I stage-whispered as we pushed the glass entrance door open and a blast of ice-cold February wind assailed our hair, spinning it up and around our faces, mine sticking in my lip gloss.

We hustled behind the blonde brick building in the sketchy section of Colorado Springs. I could still feel the denizen of the back room pulling on my consciousness. He was angry at me now, too, because they love getting attention, some of ‘em, and many wait years and years until a sensitive like me can feel them call. He wanted me to warn “dem bitches” to “stop screechin’ and goofin’ like a GD hen party,” but I just sent him a blast of sympathetic love and told him silently, “Next time.”

Like the little boy in The Sixth Sense, I believe they deserve to be able to use me to get things done. But it never happens so clearly as it does in that movie, maybe because I’m not as good as those police psychics are or even that little boy in the screenplay, or, probably, as skilled as the amalgamation of sensitives that the little boy might have been based on.  Mostly, the spirits that come through want one thing– to tell the people they love that they are still around them, watching and supporting them, and that they love them so, so much.

My daughter was excitedly pumping me for answers about who “I’d felt.” I said, “I’ll tell you later,” so here I am. Telling you and her and everyone—everyone, if they tried, could do what I do. And that’s not just what I say. That’s what the energy that many call God wanted us to realize—we’re splinters of each other, and splinters of Him. Is a drop of water in the ocean separate from the sea?

Before they codify Him or Her into books and smoosh that energy neatly between the covers, God spoke to everyone and they were grateful. He spoke in the sky and stars and when a human picks the right, helpful thing to do.  Before God can make them love their neighbor and not their credit line His or Her or Its energy was used to keep us cool to one another. We’d share dreams and brushes with the spirit world. It was normal and a gift of love.

Now, God Energy is used as a religion, to force people to follow a specific path. So, yeah, I talk to God. That’s prayer. The difference is, he talks back to me through people who have passed on and now live in the light with him—or through people who will not leave here, this plane, like that guy in the salon. I wish everyone knew what I know: What god, what he/she/it says: Everyone is Magic.

And I mean everyone. There’s a physics theory about waves. And one about atoms. And one that says we are more space between atoms than we are atoms. Most of us, according to the physicists, are filled up more with empty than with anything else. I disagree. They haven’t learned to measure it yet, but what that empty is, it’s magic.

Every once in a while I find a new witch to be.

One that only flies when she’s fed up

With the rest of you mortals.

One that speaks backwards in riddles

To dismay your logic; one with the tail

Of a lion and the head of a snake

Ready for battle ready to pounce

I have saved all my venom my love

Once I attack the poison will act. 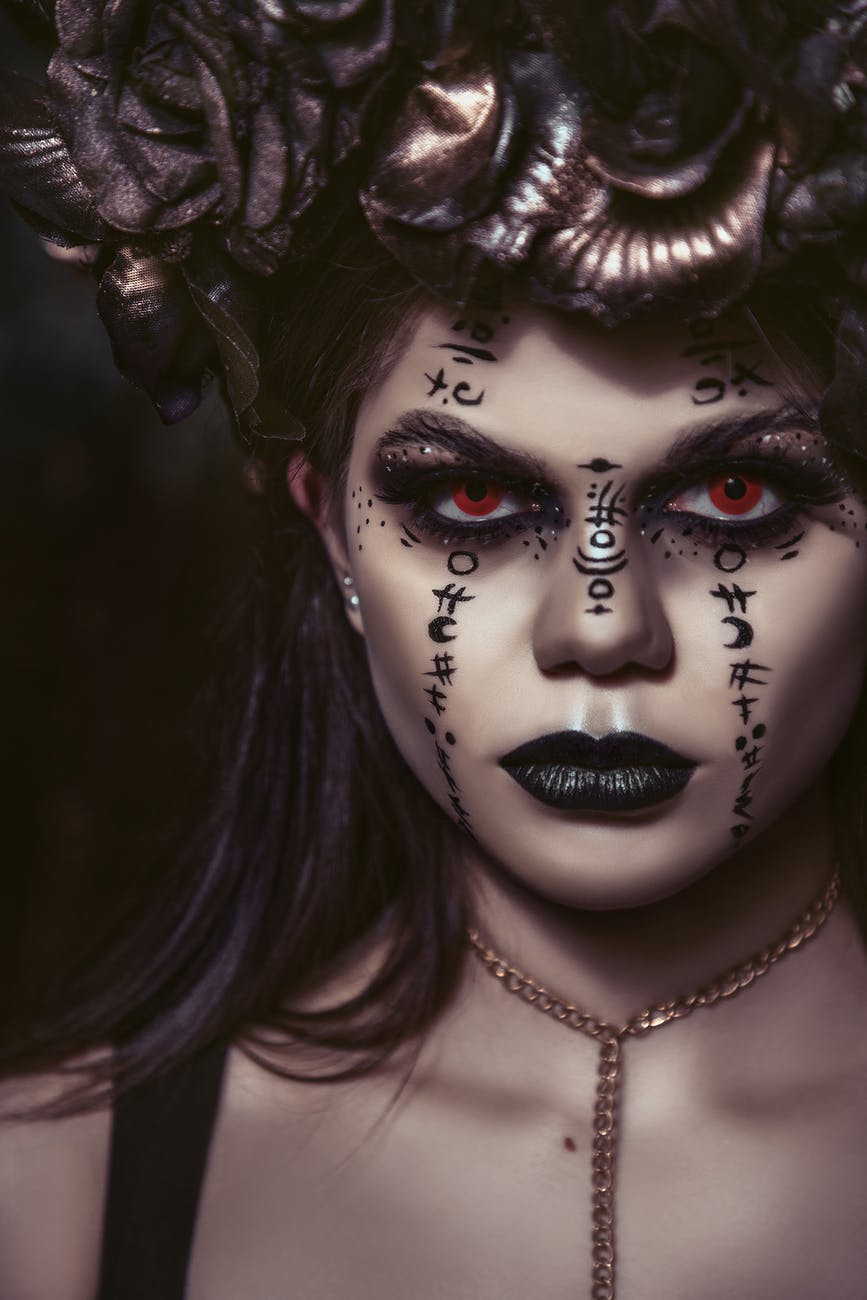 Midnight visitor between your thighs

Moaning along with moonlight owls.

Still she walks into mythos while

Her multitudes, her meaning, her power.

View all posts by ptomsky